The Original DUCKtours at Suntec City is a Tourism Award-winning attraction. First in Singapore, an impressive 18 year perfect safety record, and 1 million passengers – nothing comes close to the Original DUCKtours @ Suntec City. This hour-long adventure start with a city tour of the historical Civic District, before splashing into the water and swimming off like a duck for a picturesque harbour tour.

Climb aboard a refurbished Vietnam War amphibious vehicle for a unique tour of Singapore! Start your land and sea adventure with a big splash into the Marina Bay, where you can admire views of the bustling urban city's skyline and marvel at Singapore's most iconic landmarks—the Marina Bay Sands, Gardens by the Bay, the Esplanade Theatre and the towering Merlion.

Your journey continues as you waddle back onto land and drive past the Singapore Flyer and into the Civic District. There you will see the steps of the Old Supreme Court where the British surrendered to the Imperial Japanese army during WWII, and the War Memorial Park, a tribute to those who gave their lives during WWII's Japanese occupation. End the tour with a loop around the world’s largest water fountain at Suntec City, named the Fountain of Wealth, for good luck. 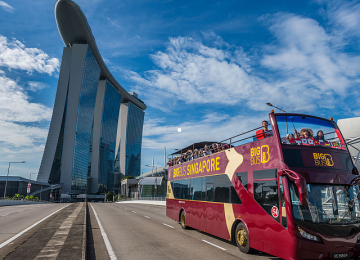